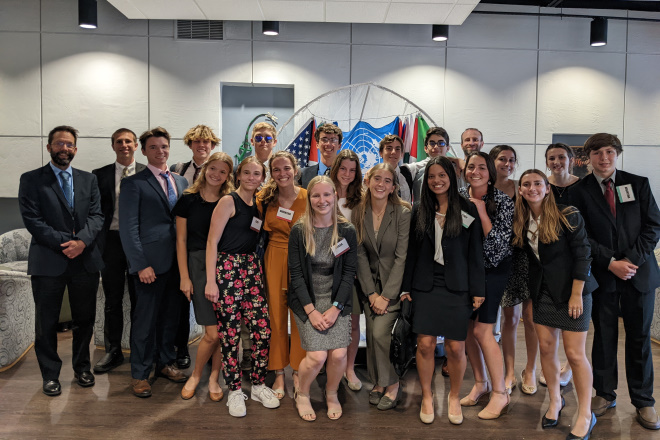 I’ve read an awful lot of position papers over the last 20+ years. The position paper readers are quite an accomplished group of people, and they don’t lower their standards when they read these submissions; if you make it past the first round of readers – as only 21 out of nearly 200 papers did this year – that is a true testament to how well they were done!  And the fact that three of these papers come from Donahue is something everyone should be incredibly proud of.
Beth Foss - Head Coordinator, Southwest Florida Model UN

Competing against some of the top Model UN teams in Florida, most of which were from enormous public schools, our students spoke and engaged in diplomacy far more than any year previously and put their countries (Russia, Argentina, and Italy) in the center of the discussion several times.

Donahue Academy’s Model UN, in only its third year, earned three honorable mentions for position papers. This placed three of our students among the top 21 out of roughly 200 participating delegates. The students who earned an honorable mention were:

Coaches Mr. Jahnke, Mr. Fairchild and Mr. Graham were thoroughly impressed with the 19 Donahue delegates who amounted to nearly 25% of the school!