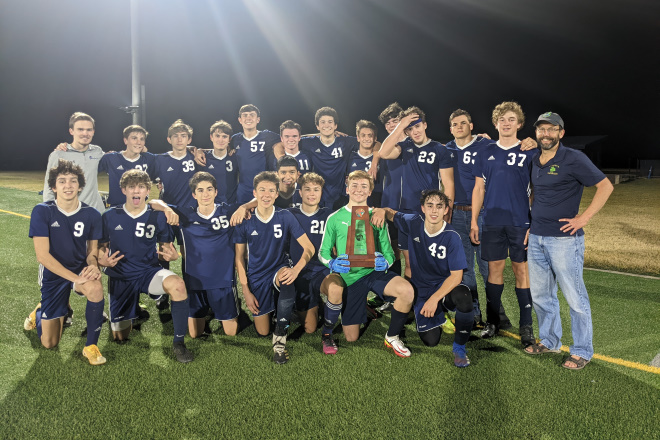 It is hard to find the words to express the amazing achievement your sons have made! In our school history, there have only been three FHSAA district champion teams.  The difficulty of competing at that level comes simply from the small size of our school (we are, for example, three or four times smaller as a high school than St. John Neumann).  Nevertheless, these problems are dissipating, as our state of Florida (which gained over 200,000 people last year), our town of Ave Maria (50 new homes a month), and our school (almost every grade waitlisted) all continue to grow at lightning pace (Please help us build our new classrooms to get more kids in our school!  We all have to contribute to build great Catholic schools!!!).  Nevertheless, amidst these growing pains, it is still a heroic effort that got your sons the championship.  I am VERY proud of them!

Now, where do we go from here?  Since many of us are new to this level of Florida high school state competition, we need to make some distinctions:

First, we are in class 2A for soccer, so we only compete with high schools with enrollment of, say, less than 300.  Of those schools, we are now in the top 32 in the entire state of Florida.

The regions themselves were divided into 4 districts, and we won the district, so we are now automatically in the regional quarterfinal.

Now here is where the math gets tricky and a bit weird.  Some folks who lost in district competition can STILL get into regionals.   How?

The FHSAA has a “power ranking” technology that allots rankings for each FHSAA soccer team based on difficulty of schedule throughout the year, goals for and against, etc.  Thus, there are four other teams in our region who lost in district but had top rankings; they will be given spots in the 5th-8th seeds of our region.

Practically, this means that we will be the 4th seed playing the 5th seed who will in fact have a higher ranking than we.  We have the home field advantage as district champions, but we will be playing a higher ranked team as a result of the weird seeding process.

We will play at home on Wednesday, Feb. 9 at 7pm.  We will probably play Bradenton Christian.  Their ranking is 158; ours is in the 350’s.  But I think our ranking is fake news based on all the injuries, absences, and coaching philosophy.  We can win it.

Semifinals would be Saturday, Feb. 12 and finals Wed the 16.  Lets not count those chickens yet, though!